Press Release: Court to rule on legality of government support for North Sea oil and gas 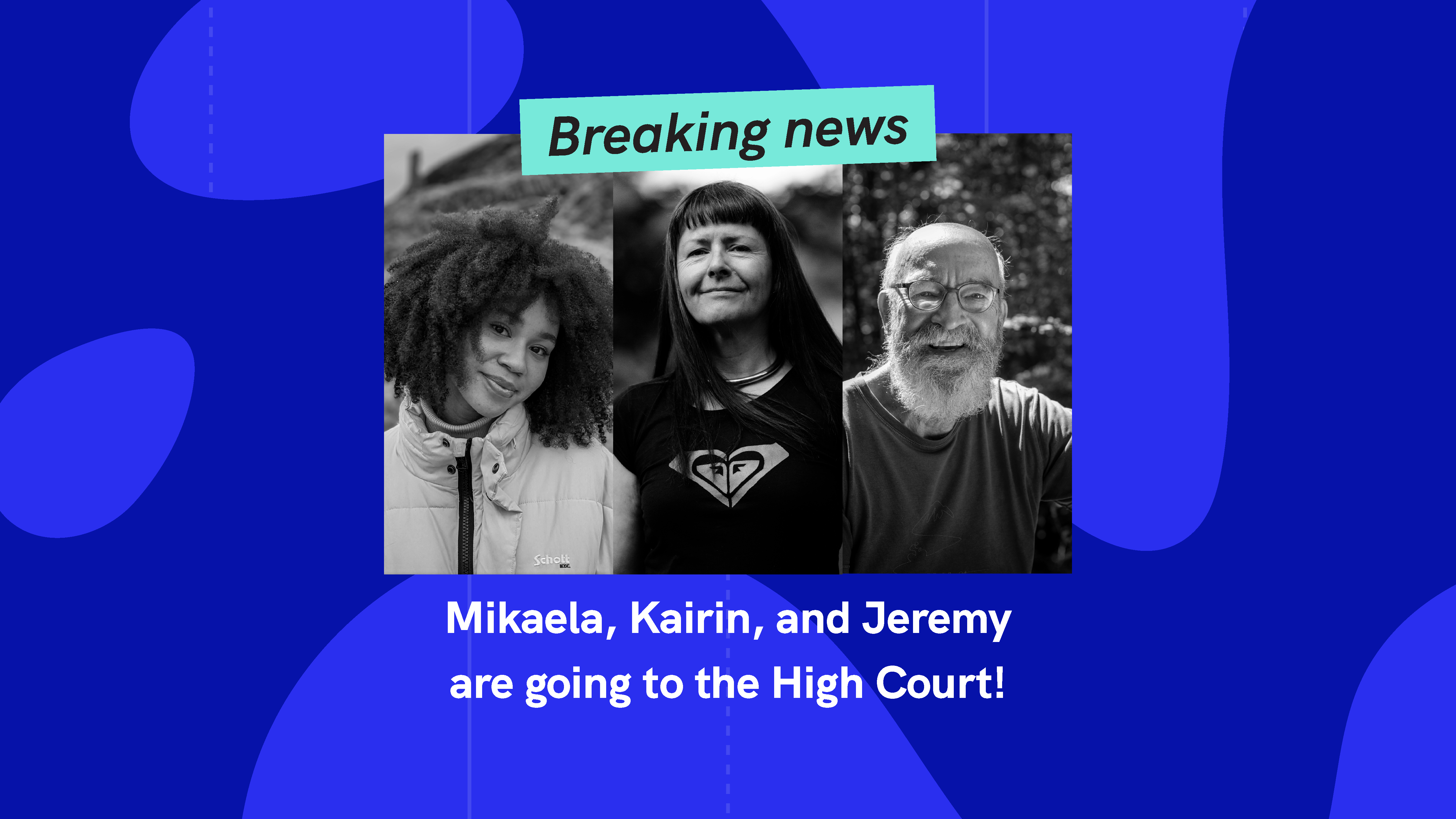 The High Court has given the go-ahead for a legal challenge to UK government support for North Sea oil and gas in a case which could spell the end for production that relies on generous public subsidies, the Paid to Pollute campaign announced today.

Three environmental campaigners are seeking a declaration from the court that the state-owned Oil and Gas Authority’s (OGA) new strategy is unlawful because it encourages production of oil and gas that is not economic for the UK as a whole and conflicts with its legal duty to achieve net zero emissions by 2050.

In a High Court order, Mrs Justice Thornton found that the claimants had “presented an arguable case” which was “in the public interest”, and that the judicial review claim has “sufficient merit to grant permission” to proceed to a full hearing.

The case names as defendants the OGA and the Secretary of State for Business, Energy and Industrial Strategy, currently Kwasi Kwarteng, who is responsible to Parliament for the OGA and sets its policy. They now have until the end of August to submit their detailed grounds of defence. The case is expected to be heard before the end of the year with a decision in early 2022.

It revolves around the tax breaks that make the UK the most profitable country in the world for oil companies to develop big offshore fields.[1] The campaigners argue that the OGA’s interpretation of its legal duty to “maximise economic recovery” (MER) of oil and gas fails to take account of the billions of pounds of public money supporting the industry.

Rowan Smith, solicitor at law firm Leigh Day, which is bringing the case on behalf of the campaigners, said: “With climate change high on the public agenda, our clients are perfectly entitled to ensure that the government is sticking to its commitments on net zero emissions. They believe that the OGA’s strategy unlawfully contradicts these commitments, and unlawfully allows production of oil and gas that does not benefit the UK economy as a whole. The Court agrees that this is arguable and warrants a full hearing.”

The new OGA strategy came into force in February 2021. In May, the International Energy Agency (IEA) said that to keep within the 1.5°C Paris climate target, investment in new fossil fuel production should stop this year. However, the UK government has refused to rule out awarding new North Sea exploration licences.[2]It is reported to be set to approve a major new project off the coast of the Shetland Islands, expected to extract 170 million barrels of oil — roughly equivalent to operating 16 coal-fired power stations for a year.[3]

Three claimants are being supported by the environmental non-profit Uplift, which in turn is co-ordinating Paid to Pollute, a new campaign supported by a coalition of environmental groups including Greenpeace UK, Friends of the Earth Scotland and 350.org.

One claimant Mikaela Loach, a climate activist and medical student at the University of Edinburgh, said: “Legal action is a last resort. In a year when so many communities have been ravaged by heatwaves and extreme weather, the UK has to heed the IEA’s call to end investment in all new oil and gas projects that are driving this climate injustice. Instead of using public money to prop up the oil and gas industry, the UK should be funding a just transition that retrains workers and builds the low-carbon industries of the future.”

A poll of over 2,300 GB adults commissioned by Uplift last month shows strong public support for ending new oil and gas extraction in the UK. Nearly two in three people (63%) believe the UK government should redirect spending from North Sea oil and gas to low-carbon industries such as wind and solar power, and barely one in four (27%) support giving out new licenses.

Since signing the Paris Agreement in 2015, the government has paid £3.2 billion of public money to North Sea oil and gas companies.[4]Each year they receive subsidies worth hundreds of millions of pounds through reliefs on decommissioning offshore installations, reduced tax rates and tax allowances.[5]

The 1998 Petroleum Act sets “the objective of maximising the economic recovery of UK petroleum.” The legal case states that Parliament clearly intended this to ensure production was cost effective, maximising the long-term value of oil and gas, and it notes that one of the principles in the OGA’s new strategy is to “add net value overall to the UK”.

In their legal case, the claimants argue that the new strategy is unlawful because it seeks to redefine MER to exclude consideration of the tax breaks the industry receives. The strategy states: “‘Economically recoverable’ in relation to petroleum means those resources which could be recovered at an expected (pre-tax) market value greater than the expected (pre-tax) resource cost of their extraction.”

The legal case claims that this frustrates the purpose of the Act by allowing the recovery of oil and gas that is economic to the operator, thanks to the financial support the UK government gives the industry through the tax regime, but not economic to the UK as a whole.

The new OGA strategy requires the industry “to assist the Secretary of State in meeting the net zero target by reducing… greenhouse gas emissions from sources such as flaring and venting and power generation, and supporting carbon capture and storage projects.”

But the campaigners’ application argues that the new strategy is irrational and inconsistent with the Net Zero target because it will lead to more oil and gas being extracted than would otherwise be the case if such uneconomic fossil fuel stayed in the ground, and therefore a greater amount of greenhouse gases being emitted. It says the business secretary’s consent to the new definition of MER fails to take account of UK domestic commitments on climate change.

UK Government will subsidise decommissioning with £18 billion of public money

The UK’s tax regime makes it the most profitable country in the world for oil and gas companies to develop big projects, according to industry analysts Rystad Energy.[8] In 2019, for each barrel of oil the UK received $1.72 in tax while Norway received $21.35.[9]

One of the most significant subsidies available to oil and gas companies is decommissioning relief for removing hundreds of old wells, rigs and pipelines, which they can offset against past, current and future profits. In 2019/20 companies claimed back £500 million from the government and official estimates put the total cost to the UK government at over £18 billion.[10]

A second claimant, Kairin van Sweeden, an SNP Common Weal organiser and daughter of a Scottish oil worker, said: “The UK government repeatedly puts the interests of oil industry capital above the labour that creates it and, in fact, above all of our collective wellbeing as residents of the planet. Serious, committed environmental stewardship would see public money spent on a just transition right now, including funding for retraining and re-skilling towards new, green, stable jobs. The funnelling of public money into the big polluters’ pockets must be fiercely rejected by us all.”

Jeremy Cox, a former oil refinery worker and the third claimant, said: “The oil and gas industry needs deep, structural change that winds down production and invests in low carbon industries. We can’t do this while pumping billions into oil and gas to extract more and more fossil fuels. Companies like Shell and BP have been paid to pollute for too long. Two thirds of the UK public think we should redirect that support to green industry. What are we waiting for?”

Carbon dioxide emissions from existing global fossil fuel reserves will push the world far beyond 1.5°C of warming and close to 2°C, research by Oil Change International has found.[14] The UN Environment Programme calculates that countries are still planning to produce more than twice the amount of fossil fuels in 2030 as would be consistent with a 1.5°C temperature limit.[15]

For further information and to arrange interviews, please contact:

About Leigh Day –Leigh Day is a law firm working for people in the United Kingdom, and across the globe, who have been injured, discriminated against or had their human rights abused.

About Uplift – Uplift is a not-for-profit initiative with a mission to support and energise the movement for a just and fossil fuel-free UK. It resources, connects, and elevates ideas and voices to support a just transition away from fossil fuel production. https://upliftuk.org/

Dr Richard Dixon, Director of Friends of the Earth Scotland, said: “A just transition away from fossil fuels is crucial for workers and communities in Scotland but that won’t be delivered through continued cash handouts to oil giants. The Government must create a rapid transition to green energy with workers and communities and redirect public money into building alternative industries and guaranteeing decent, green jobs.”

Mel Evans, head of Greenpeace UK’s oil campaign, said: “The UK has one of the lowest effective tax rates in the world for oil extraction. Our government is backing an industry that’s hanging workers out to dry, trashing the climate and costing our economy more money than it brings in. Energy minister Anne-Marie Trevelyan should start a phaseout now that supports workers properly, which means stop issuing new oil and gas licences and start funding workers to retrain in renewables.”

Gabrielle Jeliazkov, Just Transition Campaigner, Platform London said: “Beyond this case, the UK government’s wider policy of ‘maximising economic recovery’ of offshore oil and gas resources is at the heart of its hypocritical position on tackling climate change. The UK will never be a climate leader while continuing to use public money to prop up oil and gas corporations – this only risks a deferred collapse of the fossil fuel industry with devastating consequences for peoples’ livelihoods, oil and gas dependent regions and the climate. It is well past time to redirect subsidies and tax breaks to funding a ‘just transition’ led by workers, trade unions and local communities.”

Aneesa Khan, Oil Change International Communications Officer, said: " Even if coal use were phased out overnight, the emissions from oil and gas in existing fields alone would push the world beyond 1.5°C. That means governments, particularly the one hosting the vital UK climate talks at the end of the year, need to plan for a managed phase-out of production, and not to prop up oil and gas with public money.”

Farhana Yamin, Climate Lawyer & Adviser, Climate Vulnerable Forum, and Former Advisor to the Republic of the Marshall Islands, 2013- 2018, said: "I strongly support this case and hope it generates outcry at the inexcusable use of public money going to the UK oil and gas industry who are seeking to extract more pollution than the planet can tolerate. As someone who was deeply involved in the negotiation of the Paris Agreement, it’s clear to me that the UK cannot meet its commitments under that Agreement while subsiding the fossil fuel industry. It’s incompatible with any claim of climate leadership, climate justice and common sense."

[5]Sea Change: Climate emergency, jobs and managing the phase-out of UK oil and gas extraction: Platform, Oil Change International and Friends of the Earth Scotland, May 2019

[11]Shell Report on Payments to Governments for the Year 2020